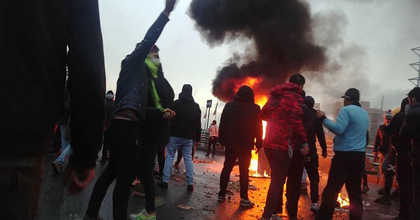 Iran is using the killing in the United States of an African-American man at the hands of a white policeman and the angry wave of protests it has caused as a propaganda tool to settle scores with Washington, which has imposed a campaign of "maximum pressure" on Tehran that includes crippling economic sanctions.

Iranian officials have denounced the killing of the man, George Floyd, in the city of Minneapolis on May 25 while using the same rhetoric Washington has used in recent months to blast state corruption and human rights abuses in Iran.

On June 1, Iranian Foreign Ministry spokesman Abbas Musavi made a rare statement in English to directly appeal to Americans and express support for what he termed their "outcry over state oppression" in protesting Floyd's death.

"To the American people: the world has heard your outcry over [state] oppression. The world is standing with you. The American regime is pursuing violence and bullying at home and abroad," Musavi said.

Musavi also called on U.S. officials and the police to stop using "violence" against Americans and to "let them breathe."

The comments echoed statements issued by top U.S. officials in support of Iranians who took to the streets in recent months, including in January following the downing of a Ukrainian passenger jet by the Islamic Revolutionary Guards Corps (IRGC).

The influential IRGC said the tragic accident was caused by human error amid heightened tensions with the United States after the assassination of the corps' top commander, Qasem Soleimani. But the government initially denied involvement in the plane's downing, angering Iranians.

Both U.S. President Donald Trump and Secretary of State Mike Pompeo expressed support for the protesters outraged by the incident, which killed 176 people.

Trump posted a tweet in English and Persian saying that his administration stood with the Iranian people. He added that "we are following your protests closely and are inspired by your courage."

For his part, Pompeo said that Iranians "are fed up with the regime's lies, corruption, ineptitude, and brutality of the IRGC under @Khamenei_ir's kleptocracy."

On May 30, Iran's Twitter-savvy foreign minister, Mohammad Javad Zarif, posted a 2018 statement by Pompeo where some of the words had been crossed out and replaced with new words in red to reflect Tehran's views and highlight the outbreak of protests in 140 cities around the United States.

"The people of America are tired of the racism, corruption, [and] incompetence from their leaders," Zarif's statement said, adding that "the American people are demanding their leaders share the country’s wealth and respond to their legitimate demands."

"Some don’t think #BlackLivesMatter," Zarif said on Twitter, which is among the social-media platforms banned in Iran, although top government officials are allowed to use it.

Pompeo retorted back with the tweet: "You hang homosexuals, stone women and exterminate Jews.

Iranian Vice President Massumeh Ebetkar, who was the spokeswoman for the hostage-takers of U.S. diplomats in Tehran following the 1979 Islamic Revolution, retweeted a story about the protests in the United States while writing that "All humanity stands with you against racism, against discrimination, against oppression, against imperialism!"

There was also condemnation from the head of Iran's judiciary, hard-line cleric Ebrahim Raisi, who is accused of having played a key role in the 1988 mass executions of thousands of political prisoners following mock trials that often lasted just a few minutes.

"Today America is not a claimant [as a purveyor of] human rights anymore, but as an accused it should face trial," said Raisi, who has been blacklisted by the U.S. Treasury, in a speech aired on state-controlled television.

Iran routinely crushes anti-establishment protests, including in November 2019, when at least 300 people were killed during street demonstrations, according to Amnesty International. Many of the victims were reportedly shot dead by snipers.