U.S. officials are increasingly alarmed by a congressional block on President Donald Trump's pick to be the next ambassador to Germany, a holdup that comes as Berlin pursues a host of anti-Israel measures and is growing closer to Iran, according to multiple administration insiders who spoke to the Washington Free Beacon. 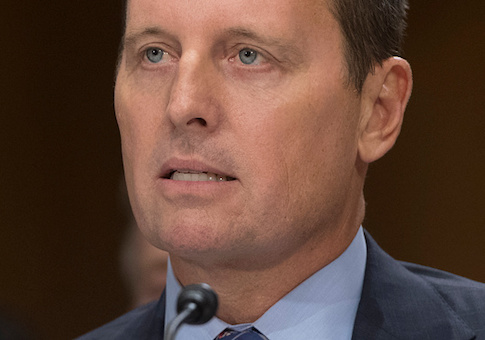 As Democrats in Congress continue to hold the nomination of Richard Grenell, a veteran Republican diplomat who was tapped by Trump to serve as the next U.S. ambassador to Germany, the post remains vacant, sparking concerns the United States is ceding leverage amid sensitive discussions regarding the future of the landmark Iran nuclear deal.

The vacancy also has left the United States with little voice to combat a series of anti-Israel efforts being pursued by the German government. Trump administration insiders are becoming increasingly fed-up with the block on Grenell, telling the Free Beacon that U.S. diplomats currently helming the post have been bungling critical national security priorities, including the Iran portfolio and recent efforts by Germany to sell Tehran sensitive equipment used by the Bashar al-Assad regime in Syria to produce chemical weapons.

"The current leader of the embassy is not an ambassador," said one senior U.S. official with direct knowledge of the situation, referring to Kent Logsdon, a former Obama administration official who is serving as the chargé d'affaires ad interim in Berlin.

"He is perfectly nice and steeped in the State Department culture, but irrelevant to serious policy makers," the official said. "He oversees a team that promotes a normalized relationship with Iran and has promoted anti-Trump speakers throughout Germany."

Grenell's absence on the international stage has only become more noticeable in recent months, as the Trump administration pursues a last minute diplomatic effort to strengthen the Iran deal or scrap it by May, sources said.

The Free Beacon first reported that former Secretary of State Rex Tillerson was ousted from the administration due in large part to his efforts to walk back a series of demands by Trump that European allies crackdown on Iran's ballistic missile program.

As negotiations continue, administration insiders have cited Germany as a prime roadblock in these discussions.

German officials have declined to go along with a bid to crackdown on Tehran's ballistic missile program, which includes scores of medium-range rockets capable of striking Israel and sparking a regional war.

America is failing to exert its diplomatic muscle in Germany as Grenell's nomination languishes in Congress amid fierce opposition by Democrats.

"The Germans have become key facilitators for Iran's dual use material and technology imports," said one Trump administration insider who works closely with the White House on Iran issues. "These are goods that ostensibly look civilian but can be used to help Iran advance its missile and nuclear programs."

"In talks with American negotiators, Germany has made it clear it does not believe Iran's missiles should be subject to a snapback of sanctions waived by the nuclear deal," the source disclosed. "Instead, the Germans say the West should simply keep waiving sanctions and offer to negotiate with Iran on its missile program by offering the regime more economic incentives in exchange for JCPOA-like concessions on missiles."

This has caused a tense diplomatic situation that has been exacerbated by the lack of a U.S. ambassador in Germany, the source said.

"At a time like this, we need a strong-willed, pro-Israel American ambassador in Berlin," said the source. "That man in Rick Grenell.  The sooner he hits the ground, the sooner we start taking it to the Germans for dragging their feet on Iranian missiles."

As the Iran issue takes top billing, Germany has also come under criticism for a series of anti-Israel efforts opposed by the United States.

In the latest kerfuffle, Germany has been blocking efforts by Israel to join the United Nations Security Council. Israel's presence on the council could send a significant international message and help thwart efforts by Arab nations to delegitimize the Jewish state at Turtle Bay.