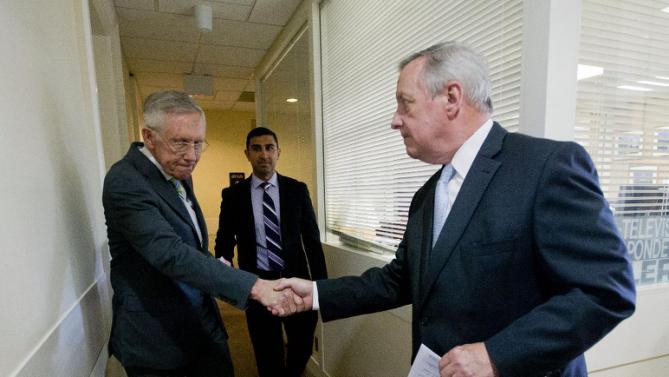 The Republican-led House cast largely symbolic votes on Friday against the Iran nuclear deal and sought to restrict President Barack Obama's authority to lift sanctions against Tehran, one day after the Senate ensured that the administration can implement the accord without congressional interference.

After three hours of hot-tempered debate, the House voted 269 to 162 to reject the deal; 25 Democrats broke with Obama to register their disapproval.

The fate of the agreement on Capitol Hill, however, was sealed on Thursday when Senate Democrats voted to uphold the accord with Iran, overcoming heavy GOP opposition to hand Obama a victory on his top foreign policy priority. The Senate action guaranteed that any legislation disapproving of the accord will never reach Obama's desk.

Obama marked the end of House votes with a statement saying it is time to turn the page.

"Now, we must turn to the critical work of implementing and verifying this deal so that Iran cannot pursue a nuclear weapon," the president said in a statement. "In doing so, we'll write the latest chapter of American leadership in the pursuit of a safer, more hopeful world."

During the debate, Democrats argued that the agreement would stabilize the Mideast, stop Iran from rushing to develop a nuclear bomb and offer a chance to end the standoff with Iran diplomatically, while retaining a U.S. threat of military action. They claimed House Republicans used their opposition to the nuclear deal to take a partisan shot at the president.

Republicans countered that the agreement's inspection regime against Iran, a state sponsor of terrorism, is weak and repeatedly recalled how Islamic extremists attacked America on Sept. 11, 2001. They said the deal will allow Iran to eventually possess a nuclear weapon and that the billions it will receive through sanctions relief will end up in the hands of terrorist groups that Tehran supports.

"This deal is far worse than anything I could have imagined," said House Speaker John Boehner, R-Ohio. "This is such a bad deal, the ayatollah won't even have to cheat to be steps away from a nuclear weapon."