Visible From Space, Iran's Coronavirus Mass Graves Give the Lie to the Mullahs' Propaganda 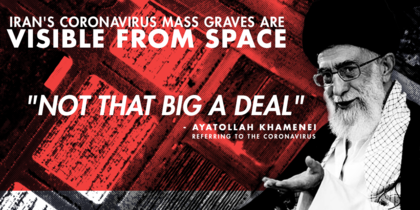 Iran's Supreme Leader Ayatollah Khamenei has dismissed the coronavirus as "not that big a deal" but Iran's Health Ministry has reported that 429 people have died of the virus, and the country's deputy health minister has contracted the virus. New satellite imagery shows that mass graves in Qom, the mullahs' spiritual center, are visible from space. This graveyard lends weight to the opposition party's claim that the regime is underreporting the deaths and the number is closer to 1,500.

The images show the Behesht-e Masoumeh complex in Qom, about 80 miles south of Tehran, where the excavation of a new section of the graveyard began as early as February 21, according to satellite imagery. The digging rapidly expanded as the virus spread. By the end of the month, two large trenches — their lengths adding up to 100 yards — had become visible from space, the Post reported.

"But videos, satellite images and other open-source data from the cemetery — a vast complex six miles north of the city center — suggest that the number of people struck down by the virus there is significantly higher than the official figure," the Post reported.