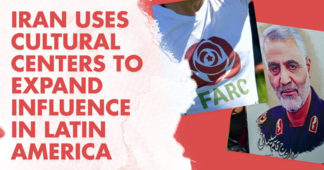 Buenaventura is one of the most violent and poorest cities in Colombia. In one of the most dangerous neighborhoods, a music sang by children voices is wafting from a house with a big sign saying Mezquita in front of it. It is a mosque and a headquarters of the local Shia Muslim community led by Sheikh Munir Valencia, a Colombian cleric who got educated in Iran.

Munir Valencia was born in Buenaventura. His mother raised him to be a proper Christian. When he was preparing to go to service of God and work in a church, he met a girl from a Muslim family which made him question his religion and eventually he converted. As a new ardent Muslim, he was offered a scholarship to study in a famous mosque in Buenos Aires under a prominent Iranian cleric Mohsen Rabbani.

As he later proved his talent and devotion to Islam, he and his wife were given an opportunity to study in Qom. As he describes, he got everything for free, starting from education and accommodation to transportation and other benefits. Once he came back, he started to run an educational and cultural center as well as a local mosque to practice his religion and share it with the community.

Munir Valencia is not the only one in Latin America who converted to Shia Islam and traveled to Qom to get an Islamic education to spread in local communities. In fact, Iranians have built a well-structured and systematic network of cultural centers and local mosques usually led by converts trained in Iran with an aim to recruit local people and increase Tehran’s influence in the region.

As Emanuele Ottolenghi, an expert on activities of Iran in Latin America from Foundation for Defense of Democracies, explains “When people convert, they travel to Iran and the trip is fully funded by the regime. It is usually a two-month trip during which they take classes, see the Iranian [religious] culture, holy sites, or battlefields of the Iraq- Iran war. Part of this process is designed to identify the most talented students because most of them come back or stay in Qom even for years to train to become clerics.”

When they come back, their role is clear –promote their religion and the Iranian regime. The cultural centers seem to be the most convenient way to do so as it allows them to organize events, publish texts in Spanish or spread their message on social media.