WASHINGTON — Iran has exceeded a key limitation on how much nuclear fuel it can possess under the 2015 international pact curbing its nuclear program, effectively declaring that it would no longer respect an agreement that President Trump abandoned more than a year ago, state media reported on Monday.

The breach of the limitation, which restricted Iran’s stockpile of low-enriched uranium to about 660 pounds, does not by itself give the country enough to produce a nuclear weapon. But it signals that Iran may be willing to abandon the limits and restore the far larger stockpile that took the United States and five other nations years to persuade Tehran to send abroad.

The developments were first reported by the semiofficial Fars news agency, citing an “informed source.” Mohammad Javad Zarif, the Iranian foreign minister of Iran, was later quoted confirming the news, according to another semiofficial outlet, the Iranian Students’ New Agency, or ISNA. 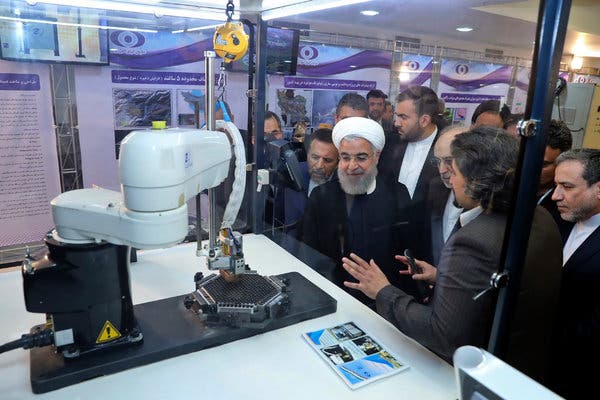 The report from Fars said that representatives of the International Atomic Energy Agency determined last week that Iran had passed the threshold, but a spokesman for the agency said on Monday that inspectors were “on the ground” and would “report to headquarters” once the stockpile had been verified.

It was unclear how much the action would escalate the tensions between Washington and Tehran after the downing of an American surveillance drone in June nearly resulted in military strikes.

But it returns the focus to Iran’s two-decade pursuit of technology that could produce a nuclear weapon — exactly where it was before President Barack Obama and President Hassan Rouhani of Iran struck their deal four years ago.

While the Trump administration had no immediate reaction to the announcement, Secretary of State Mike Pompeo said last month that the United States would never allow Iran to get within one year of possessing enough fuel to produce a nuclear weapon. His special envoy for Iran, Brian H. Hook, has often said that under a new deal, the United States would insist on “zero enrichment for Iran.”

Iran has so far rejected beginning any negotiation, saying that the United States must first return to the 2015 agreement and comply with all of its terms.