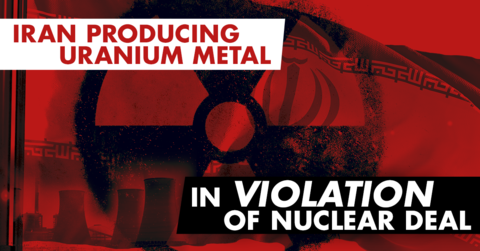 BERLIN — The United Nations’ atomic watchdog agency said Wednesday its inspectors have confirmed that Iran has begun the production of uranium metal — another violation of the 2015 landmark nuclear deal with world powers.

Uranium metal can also be used for a nuclear bomb and research on its production is specifically prohibited under the nuclear deal — the so-called Joint Comprehensive Plan of Action — that Tehran signed with Germany, France, Britain, China, Russia and the United States in 2015.

Iran had previously announced the move, saying its plans to conduct research and development on uranium metal production were part of its “declared aim to design an improved type of fuel,” according to the IAEA.

Since the unilateral American withdrawal from the deal in 2018, the other members have been working to try and preserve the accord. Tehran has been using violations of the deal to put pressure on the other signatories to provide more incentives to Iran to offset crippling American sanctions re-imposed after the U.S. pullout.

The ultimate goal of the deal is to prevent Iran from developing a nuclear bomb, something it insists it does not want to do. Iran now has enough enriched uranium to make a bomb, but nowhere near the amount it had before the nuclear deal was signed.

The latest move by Tehran further complicates the efforts of the other member nations to entice the U.S. to return to the deal — something President Joe Biden has indicated he would be open to.

When Iran announced its plans in January to produce uranium metal, the German, French and British foreign ministries issued a joint statement saying they were “deeply concerned.”