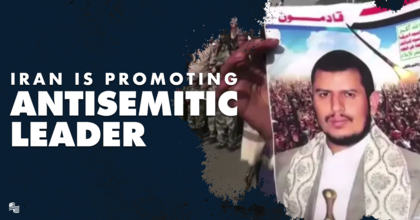 Iran’s role in Yemen gives it the ability to project power into the Red Sea and the Bab al-Mandab Strait.

Although Iran’s Foreign Minister Javad Zarif and Supreme Leader Ayatollah Khamenei reject claims that their views are antisemitic, they have increasingly been highlighting their Yemenite Houthi allies of the Ansar Allah movement, whose slogan is “curse the Jews.”

The Houthis rose to prominence in 2015 when they rapidly conquered part of the country and threatened to take Aden. Iran backs the Houthis against Saudi Arabia, which had intervened to prevent Aden from falling. Iran’s role in Yemen gives it the ability to project power into the Red Sea and the Bab al-Mandab Strait. It has shipped drones and missiles to the Houthis. The Houthi rebels call themselves Ansar Allah (God's Helpers) and they make no secret of their views on Jews. Their official slogan is “God is great, death to America, death to Israel, curse the Jews, victory to Islam.”

Iran began to see the Houthis as a proxy force against Saudi Arabia in 2016 and 2017, and encouraged them to use drones and ballistic missiles to strike at Riyadh. The Houthis complied, and in 2019 their drones were hitting Saudi cities weekly. Their ballistic missiles were flying hundreds of kilometers. Iran’s love affair with Ansar Allah grew to such an extent that when it planned the drone swarm attack on Saudi Arabia’s Abqaiq in September 2019, it gave the Houthis credit for the attack. This was done with the agreement of the Houthi commanders.

Hassan Nasrallah, the Hezbollah leader and key Iran ally, also began to praise the Houthis. Increasingly he showed that Iran’s axis of alliances, which it calls “resistance,” is like an Iranian version of the old Warsaw Pact: a serious alliance system that combines Shi’ite religious fundamentalism with an almost messianic worldview where Israel and the US are the central enemies, or “evil” and “satanic.”

IRAN'S GOAL is to knit all its allies together. The Iranian Islamic Revolutionary Guard Corps gives its blessing to the iconography of Iran’s role, with the IRGC symbol of a fist clutching a rifle spreading around the Middle East like mushrooms popping up from the land. Iran’s IRGC has direct links to Iraqi-based Shi’ite militias, and has key links with Hezbollah.