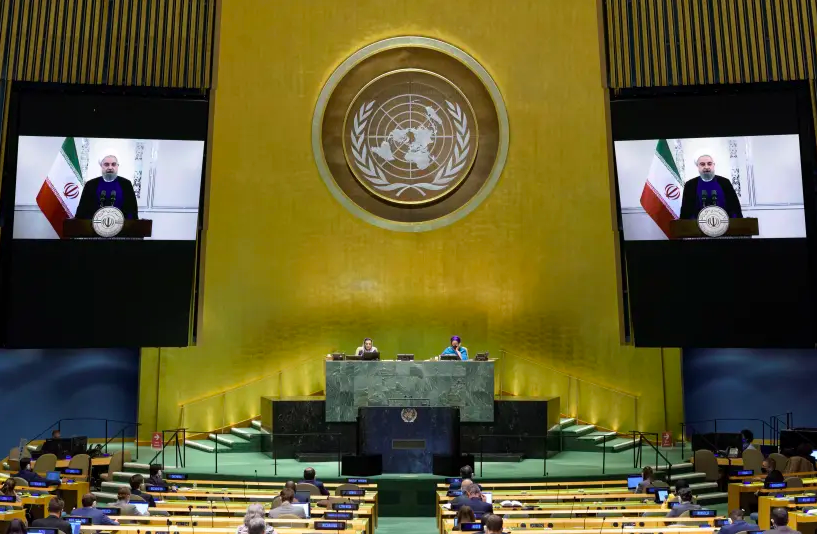 Iran rejected a third US offer on Tuesday to launch negotiations over a new nuclear deal in exchange for the lifting of some American sanctions.

The US offer was leaked to the Politico website late on Monday, but was rejected in a matter of hours.

Iran said that it will not stop its 20% uranium enrichment before the US lifts all sanctions, Iranian state TV quoted an unnamed official. The official’s comment came as a reaction to the US media report that Washington would offer a new proposal involving reducing 20% enrichment to jump-start talks.

“A senior Iranian official tells Press TV that Tehran will stop its 20% uranium enrichment only if the US lifts ALL its sanctions on Iran first,” state-run Press TV said on its website.

“The official said Tehran will further reduce its commitments under the 2015 nuclear deal if the US does not lift all sanctions, warning that Washington is rapidly running out of time,” it added.

The Iranian rejection of new talks was the third time the Islamic Republic had turned down a US offer to open talks about a new nuclear deal and the continuation of international sanctions against the regime.

The Biden administration has been seeking to engage Iran in talks about both sides resuming compliance with the deal, under which economic sanctions on Tehran were removed in return for curbs on Iran’s nuclear program to make it harder to develop a nuclear weapon.

At the same time, Washington has wanted to ensure that Iran fully returns to the limits in a way that could give it leverage to negotiate new concessions that were not part of the 2015 nuclear deal from Iran.

Some of the issues emphasized by US President Joe Biden’s administration – extending nuclear limits beyond 2030, limits on ballistic missile testing and limits on Iran’s aggressive behavior in the Middle East – reflect Israeli positions, though there is doubt in Jerusalem about how committed the president is to achieving these concessions.

Publicly, Israel has opposed any deal that does not completely end Iranian nuclear enrichment.

Politico said a US proposal, the details of which it said are still being worked out, would ask Iran to halt some of its nuclear activities, such as work on advanced centrifuges and the enrichment of uranium to 20% purity, in exchange for some relief from US economic sanctions.

Despite the initial Iranian reports which rejected ending 20% uranium enrichment at this point, there was no explicit rejection of the US demand to halt work on advanced centrifuges.

Both issues are important if Iran is to cut down its current estimated three-month timeline to develop a nuclear bomb.

However, in the past Israeli intelligence and nuclear experts told The Jerusalem Post that the Islamic Republic has had trouble developing advanced nuclear centrifuges.

Even recent announcements have reflected that Tehran has few working advanced centrifuges and has not necessarily recovered from the destruction of its main advanced centrifuge assembly facility in July 2020, which the ayatollahs attributed to Israel.

If Iran is showing flexibility regarding advanced centrifuges, this could explain why.

BIDEN’S PREDECESSOR, Donald Trump, withdrew from the deal in May 2018 and reimposed US sanctions. Subsequent to May 2019 after the US also ended certain waivers of nuclear sanctions, Iran started to violate some of the pact’s nuclear restrictions in retaliation.

The odds of any progress to revive the deal before Iran holds a presidential election in June have dwindled, after Tehran opted to take a tougher stance before returning to talks, officials have said.

According to the Politico report, the American proposal would ask Iran to stop some of its nuclear activities – such as work on advanced centrifuges and the enrichment of uranium to 20% purity – in exchange for some relief from US economic sanctions, said one of Politico’s two sources.

However, the details of this potential deal are still being worked out by the US and it’s not at all certain that Iran will accept the terms. Indeed, Tehran rejected a US proposal earlier this year, saying it was “unacceptable,” countering with an offer to limit uranium enrichment for one month in exchange for an end to sanctions, which the Biden team declared a non-starter.

The American proposal slated to be set forth this week is “about trying to get the conversation started” between the United States and Iran, one of the sources familiar with the situation told Politico.