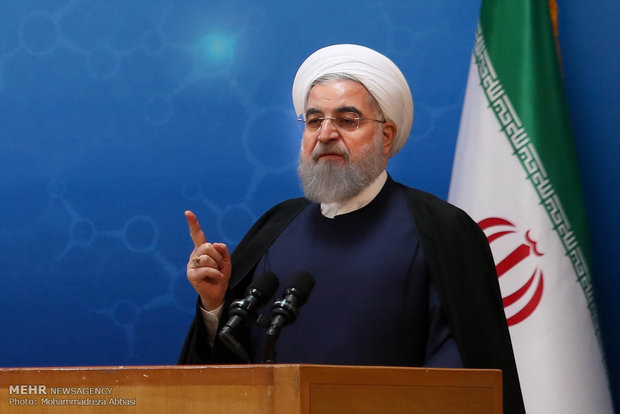 Speaking in a ceremony marking the 12th anniversary of ‘National Day of Nuclear Technology’ in Tehran this morning, President Hassan Rouhani said that Iran’s nuclear program has not stopped in his term, underlining that Iran’s nuclear industry is moving faster than before.

Rouhani continued "some people think that in our eleventh and twelfth governments, our nuclear movement has slowed down and our centrifuges are not spinning or are spinning slowly, I want to tell the great nation of Iran clearly that our nuclear industry is moving faster than before with more energy, accuracy, and more accurate calculation.”

Pointing out that last year, 42 nuclear-related projects were unveiled, the Iranian president added that this year, 83 nuclear-related achievements were unveiled. In part of his remarks, Rouhani pointed out that Iran needs both hard and soft power which form the smart power together, adding that Iran’s diplomatic power can help Iran reach its rights.

Rouhani stressed that Iran seeks ‘constructive engagement’ with the world, adding that Iranians are a nation whose culture and religion have taught them to remain loyal to their commitments in any agreements and Iran will not be the first country to violate the nuclear deal.