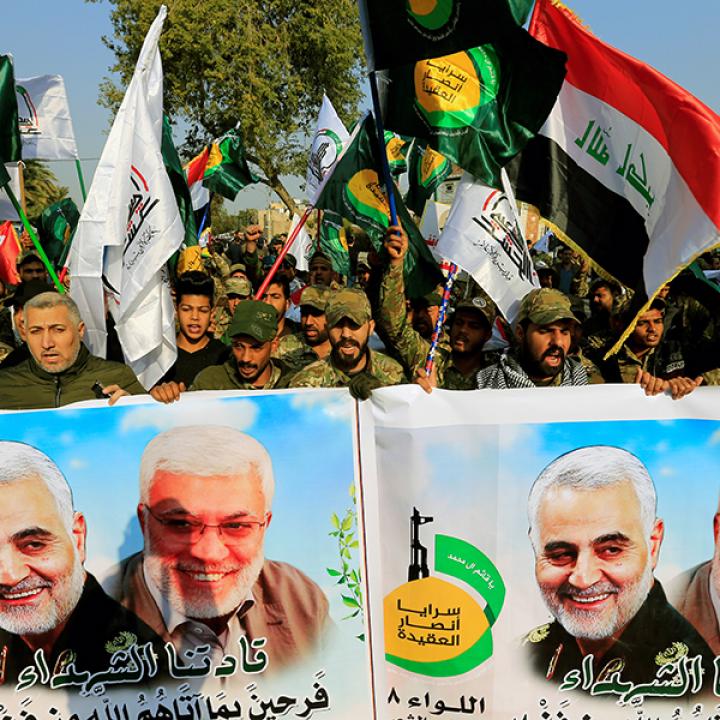 Last October, the Treasury Department’s Office of Foreign Assets Control designated five Iranian entities for obtaining American voter registration data in order to influence U.S. elections and incite unrest. According to former director of national intelligence John Ratcliffe, Iranian operatives sent threatening emails to Democratic voters while posing as members of the pro-Trump white nationalist group the Proud Boys. One of the entities behind this disinformation campaign was the Islamic Radio and Television Union (IRTVU), which supports and in many cases created the bulk of the television channels and other media outlets run by Iran’s proxies abroad—a mission in line with the union’s status as the main propaganda arm of the Islamic Revolutionary Guard Corps-Qods Force (IRGC-QF).

Indeed, the foreign activities of IRTVU and related entities merited U.S. government attention long before this designation, and for much broader reasons than election interference. Tehran’s media strategy in the Middle East is an integral part of its effort to justify and advance its regional expansionism project among a widespread audience. Countering this strategy will require more than just designating individual entities, even ones as extensive as IRTVU.

The Axis of Resistance Media Network

Established in 2007, IRTVU falls under the Iranian Ministry of Culture and Islamic Guidance, a department chaired by one of the few cabinet ministers who must receive approval from the Supreme Leader in order to take the job. Tasked with disseminating an anti-American and anti-Israeli narrative in the Middle East, the organization functions as an umbrella for “axis of resistance” media outlets throughout the region. IRTVU provides these outlets with financial, technological, and organizational support, helps train their personnel, and devises a unified strategy for them to follow.

Tehran has sought to directly influence public opinion abroad since well before IRTVU was formed. Working closely with the IRGC-QF, the Islamic Republic of Iran Broadcasting World Service launched news channels in several languages, including al-Alam satellite television in Arabic. But IRIB’s efforts were eclipsed by the media strategies of other nations, particularly Qatar and Saudi Arabia, spurring the regime to establish IRTVU in response.

Today, IRTVU has more than 210 affiliates in thirty-five countries, most of them in the Middle East. These include satellite television channels, radio stations, news websites, news agencies, training centers, media production companies, and research centers. The union is governed by three overarching structural bodies:

IRTVU Strategy in Iraq and Lebanon

IRTVU’s activities are most extensive in Iraq and Lebanon. Iran’s public opinion strategy in these two countries mirrors its approach to political and military activities there—Hezbollah is in charge of IRTVU projects in Lebanon, while an umbrella organization called the Iraqi Radio and Television Union supports the plethora of militia media outlets in that country.

The latter union is headed by Hamid al-Husseini, an Iraqi cleric who has close ties to the Supreme Leader’s office. According to conversations with reliable sources in the Iraqi government, he has confided to people in his circles that he is a colonel in the IRGC—a connection that began forming after he fled Iraq during Saddam Hussein’s era. The union has helped establish and sustain numerous Iraqi media outlets owned by Iranian-backed militias, including the television networks al-Etejah (run by Kataib Hezbollah), Al Ahad (run by Asaib Ahl al-Haq), al-Nujaba (run by Harakat Hezbollah al-Nujaba), and al-Baeenah (run by Saraya al-Jihad).

In Lebanon the model is different. Hezbollah oversees all IRTVU activities there, including the development of non-Lebanese outlets such as the Houthis’ Al Masirah television, which broadcasts from Beirut’s southern suburb of Dahiya. Other entities directly created by IRTVU are likewise based in Dahiya and run by Hezbollah, including the Union Center for Media Training, the news agency U-News, and the Union Center for Research and Development (aka U-feed).