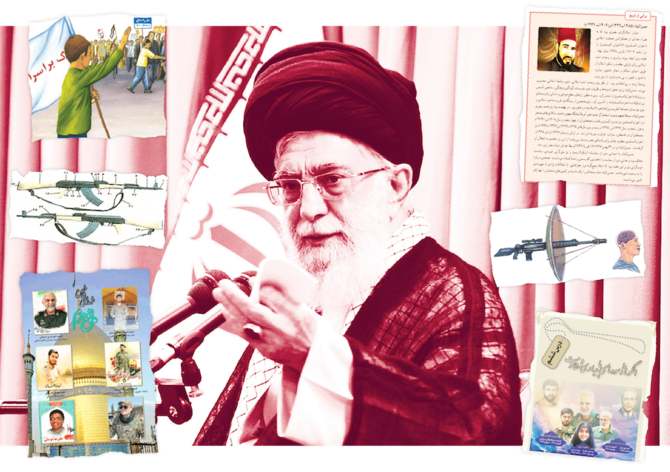 WASHINGTON, D.C.: The government of Iran remains the world’s largest state sponsor of terrorism, and unfortunately its educational curriculum is no exception. Public school teachers in Iran today use textbooks designed by the state to indoctrinate young people to export global revolution using terrorism and other aggressive means. As a result, the content of its textbooks should be a global concern.

I recently completed the first comprehensive study of hate and extremism in current Iranian textbooks in nearly half a decade as part of my ongoing work with the Anti-Defamation League, the results of which are accessible in full on the ADL website.

Evaluating teaching materials to identify and discourage hateful content is an important trend in the Middle East. Accordingly, this essay reproduces key findings from the ADL research on Iran and adds several notable new examples beyond the content in the original report.

The Iranian state curriculum especially encourages terrorism and political subversion against Arab states in particular. It also demonizes America, Israel and the Jewish people, including in ways that are part and parcel with these same hateful conspiracy theories and calls to violence.

For this reason, condemning the problematic content in Tehran’s textbooks is only part of the solution. We should also redouble efforts to teach peace-building and interfaith tolerance in every country’s textbooks, so that it is harder to exploit suspicions between East and West, between Sunnis and Shiites, or between Muslims, Jews, Christians and followers of other faiths.

The Iranian government’s current textbooks indoctrinate children with messages that put them on a permanent footing for war. The books teach children how to assemble assault rifles, to carry out military maneuvers, and to learn about the importance of cyber warfare.

The books also idealize young people who sacrifice their lives to sustain or export the Iranian revolution. Often this involves glorifying child soldiers who fought and died under traumatic circumstances during the Iran-Iraq War or displaying children wielding weapons of war, including a rocket launcher.

Likewise, the textbooks glorify a 20-year-old Iranian named Muhammed Reza Dehghan as a “model martyr defending the shrines.” Dehghan was killed within weeks of deploying to Syria as a volunteer fighter for the student wing of Iran’s Basij paramilitary. The books also teach that an ideal Basij member always yearns for martyrdom.

Also presented on the same textbook page listing “model martyrs defending the shrines” is Mustafa Badreddine, the deceased terrorist mastermind of Lebanese Hezbollah, as well as Ali Reza Tavassoli, a founder of the Fatemiyoun Brigade, one of the Islamic Revolutionary Guard Corps’ proxy groups that recruits young Afghan men, including child soldiers, to fight in Syria.

This year Iran’s state curriculum added passages across numerous subjects to celebrate the martyrdom of the IRGC’s late terror master, Qassem Soleimani. For example, an official textbook on military studies now features a graphic under the heading “Templates and Models of Steadfastness and Resistance.”

In addition to Soleimani, the picture includes Abu Mahdi Al-Muhandis, whom it calls a “model martyr of the Islamic World.” At the time of their death in 2020, both al-Muhandis’s Kata’ib Hezbollah in Iraq and Soleimani’s IRGC Quds Force were US-designated terrorist groups.

Militant language is even applied to policies that Tehran insists have no military application. Remarkably, a current high school textbook presents the work of “young Iranian nuclear scientists” as “a blessing with your great jihad and the blood of your bounteous youths.”

Those most immediately impacted by Iran’s radical curriculum are its Arab neighbors. For example, an eleventh-grade history textbook brazenly calls for the overthrow of the Kingdom of Bahrain, proclaiming that “the Bahraini revolution has not yet come to fruition” and that this should specifically include “the overthrow of Al-Khalifa rule.”

This passage is part of an entire chapter focused on exporting Iran’s revolution across the Arab world. It advocates for uprisings in recent years against what it calls “puppet” governments in Egypt, Libya, Tunisia and Yemen in hopes of advancing what the books laud as “the school of Hajj Qassem Soleimani.” The chapter also expresses noteworthy admiration for the Muslim Brotherhood and its founder, Hassan Al-Banna.

These extremist messages are then supplemented with intolerance and conspiracy theories.  For example, a current tenth-grade textbook on Defense Preparation teaches the false allegation that Saudi Arabia and America created Daesh as an act of sabotage against Iran.  A religious law textbook for the same grade suggests that the followers of certain religious creeds are physically unclean, including Buddhists, Baha’is and Saudi Salafis.

The Iranian curriculum casts America as today’s leading villain in a perennial conflict between Islam and imperialism. The books characterize America as “the Great Satan” and claim international sanctions against Iran are merely part of Washington’s “Satanic plan” to subjugate the nations of the world and to destroy people’s faith in Islam.

The textbooks also claim that America and other Western nations are engaged in a conspiracy to spread disbelief and moral corruption using such tools as drugs and video games, and that Western Christians who try to spread their faith are engaged in this widespread imperialist plot rather than a genuine expression of their religious doctrine.

Such disinformation is even applied to the issue of the global pandemic by Iran’s latest official textbooks, which teach that foreign media has exaggerated the coronavirus to deter Iranians from pro-regime rallies and to create panic about medical shortages.

Unsurprisingly, the state of Israel is targeted for explicit overthrow by Iran’s official textbooks. Graphics in the books today teach the chant “Death to Israel” and feature the late Ayatollah Ruhollah Khomeini’s instruction that “Israel must be wiped out.”

But Tehran’s animus is not directed solely at Israel. Its curriculum also encourages a fundamentally anti-Jewish narrative of human history from ancient to modern times, selectively presenting Jewish people in an overwhelmingly negative way.

For example, Saudi Arabia recently instituted textbook passages teaching the Charter of Madinah as a model for Muslim-Jewish coexistence. The Iranian curriculum, on the other hand, still places much greater emphasis on the example of Jewish tribes that broke that pact, suggesting that Jews in general are untrustworthy and seek to destroy Islam.

Iran’s textbooks similarly scapegoat Jewish people for a range of societal ills in a way that propagates longstanding anti-Jewish generalizations such as greed, disloyalty or world domination.

Debates over the appropriate direction for Muslim prayer or the possibility of inaccurate hadiths are each presented as the work of immoral Jewish conspiracies. So are Freemason clubs.

As is global media consolidation. Furthermore, all Jewish people who aspire to any form of self-determination are labeled “enemies of Islam,” even those who advocate for a two-state solution and Palestinian statehood.