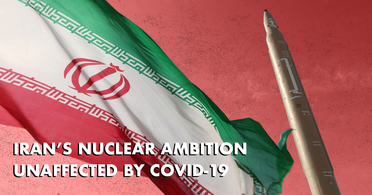 Iran’s progress towards a possible nuclear weapon has continued unaffected by the Covid-19 outbreak, satellite imagery has shown.

The commercially available footage of four Iranian facilities, analysed by Jane’s intelligence, showed Iran’s nuclear activity has not slowed during the pandemic.

The activity and launch at the Shahrud Missile Test Complex in particular indicated that Iran’s missile and space programs remained largely unaffected by the Covid-19 pandemic, according to Jane’s.

In April, as Tehran grappled with the coronavirus outbreak, the Islamic Revolutionary Guard Corps launched its first satellite into space, revealing what experts described as a secret military space program that could advance its ballistic missile development.

The continued missile activity followed Iran’s move to all but abandon the limitations of its 2015 nuclear deal with world powers.

US President Donald Trump unilaterally withdrew America from the agreement known as the Joint Comprehensive Plan of Action (JCPOA) in 2018.

Mr Trump’s decision to renege on the deal set off a series of escalating attacks that culminated in a US drone strike in January that killed Iranian general Qassem Suleimani in Iraq. In retaliation, Tehran launched a ballistic missile attack aimed at American soldiers stationed in Iraq.

Jane's noted that the new generation of centrifuges, scheduled to be unveiled at the Iranian nuclear facility at Natanz in Isfahan Province, could be in violation of the JCPOA restrictions.