Israel Prime Minister Benjamin Netanyahu said Israel will protect itself from “any threat or any attempt to harm its sovereignty” after its military downed an Iranian drone that infiltrated the region.

“Israel is seeking for peace, but we will continue to defend ourselves against any attack against us, and against any attempt by Iran to establish military bases in Syria or anywhere else,” Netanyahu said Saturday after meeting with top brass at military headquarters in Tel Aviv.

He said had spoken with both Russian President Vladimir Putin and U.S. Secretary of State Rex Tillerson about the recent involvement.

The State Department issued a statement Saturday stating that the U.S. "strongly supports Israel's sovereign right to defend itself."

"Iran's calculated escalation of threat and its ambition to project its power and dominance, places all the people of the‎ region - from Yemen to Lebanon - at risk.‎ The U.S. continues to push back on the totality of Iran's malign activities in the region and calls for an end to Iranian behavior that threatens peace and stability," the statement read. 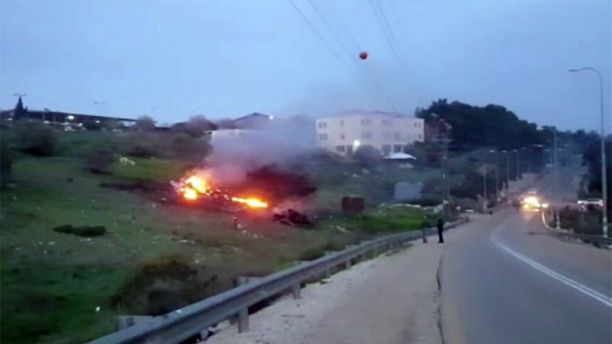 Israel’s military launched a “large-scale attack” after shooting down the infiltrating drone and struck Iranian targets deep in Syrian before one of its own jets was downed.

The raids hit at least 12 targets, including three aerial defense batteries and four targets that were part of Iran’s military establishment in Syria. The offensive marks Israel’s most substantial involvement in Syria to date.

Israel has issued several stern warnings of late about the increased Iranian involvement along its border in Syria and Lebanon.

CLICK THE LINK TO READ THE FULL STORY ON FOX NEWS-http://www.foxnews.com/world/2018/02/10/israels-military-strikes-syria-downs-iranian-drone.html