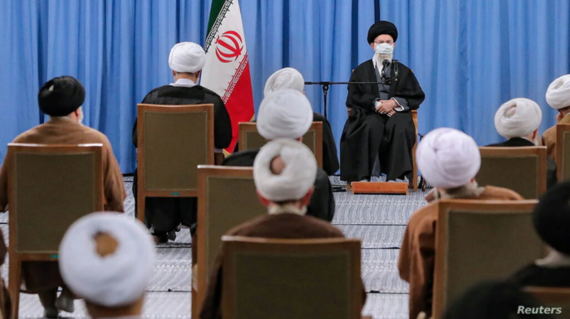 Iran's Supreme Leader Ayatollah Ali Khamenei said on Monday Iran could increase its level of uranium enrichment to whatever the country needs, including up to 60%, as a standoff between Iran and the United States continues over the future of the Iran nuclear deal.

State television quoted Khamenei on Monday as saying, "Americans and the European parties to the deal have used unjust language against Iran. ... Iran will not yield to pressure. Our stance will not change."

He said Iran's uranium enrichment level will not be limited to 20%.

Under the 2015 nuclear agreement between Iran and six world powers, Iran is limited to refining uranium to 3.67%. However, Iran has been in breach of the agreement since the United States withdrew from the pact during the Trump administration and has resumed enriching uranium to 20%.

U.S. State Department spokesman Ned Price said Khamenei's comment "sounds like a threat." He added, "We're not going to respond in specific terms to hypotheticals, to posturing. What we are going to do is to reaffirm the proposition that is on the table — the United States is willing to meet with the Iranians to hash out these difficult complex questions."

Last week, the Biden administration said it was ready to talk to Iran about both nations returning to the nuclear accord.

Earlier Monday, Secretary of State Antony Blinken reiterated that stance, saying the U.S. is prepared to return to the Iran nuclear deal if Tehran shows "strict compliance" with it.

Blinken told the U.N.-backed Conference on Disarmament by video, "The United States remains committed to ensuring that Iran never acquires a nuclear weapon. Diplomacy is the best path to achieve that goal."

Iran has insisted that Washington end sanctions before the deal can be restored, while Washington says Tehran must first return to full compliance with the agreement.

Earlier, Iran's Parliament said that an interim inspection agreement reached Sunday with the International Atomic Energy Agency is "illegal," leaving its application in doubt. The three-month agreement allows for a continuation of limited inspections of Iran's nuclear facilities.

Iran's Parliament said the government of President Hassan Rouhani overstepped its authority in reaching the agreement.

It remains unclear if the country's Council of Experts, the ultimate arbiter in such matters, will revoke the agreement.