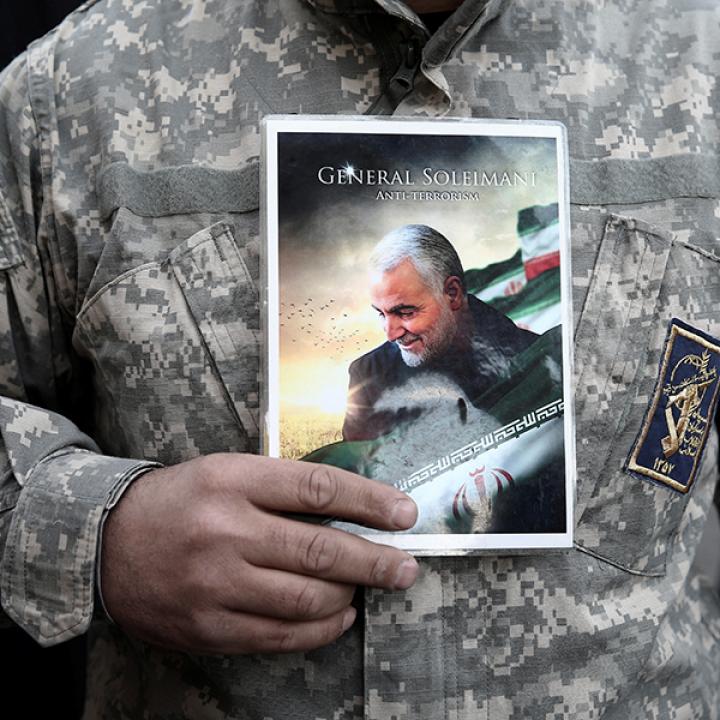 In addition to prohibiting any negotiations over Iran’s military power or regional ambitions, the legislation would oblige the government to work toward evicting the United States from the Middle East and destroying Israel within twenty years.

On December 30, hardline politicians in Iran introduced a new parliamentary bill mapping out the country’s response to the killing of Qods Force commander Qasem Soleimani by a U.S. drone strike one year earlier. Centered around Supreme Leader Ali Khamenei’s July 21 directive to avenge Soleimani’s death, the legislation includes four main goals: (1) initiate a “decisive act of revenge” by weakening the United States and evicting it from the region; (2) counter Israel’s actions and follow through on Soleimani’s objective of destroying that country; (3) counter America’s economic “terrorism” against Iran; and (4) pursue an “honorable” (meaning defiant) foreign policy.

If the law passes, it would by implication have full support from the Supreme Leader, so President Hassan Rouhani’s team and future governments would be obliged to follow it. The executive branch might create some room for maneuver by crafting various regulations to shape how the law is actually implemented, but the Majlis could intervene at any point to roll back unwanted changes.

As Article 1 makes clear, the bill would formally compel the government and armed forces to take active measures aimed at forcing U.S. Central Command out of the region, which Iran has defined as “the Persian Gulf region and West Asia.” It would also hold host countries equally responsible for any U.S. military and intelligence-gathering activities that originate from their territory and go against any Iranian interests. In addition, it stipulates that any U.S. military action against Iran shall result in a proportional or stronger military response aimed at the country of origin (Article 1.2). Likewise, Article 4 states that Iran’s armed forces are obliged to respond commensurately to any action that attempts to kill Iranian citizens. And in an effort to create rifts between the United States and host nations, the bill promises unspecified “defense cooperation” at an agreed price to any country that stops hosting U.S. forces.

As for funding, Article 1.4 authorizes the Islamic Revolutionary Guard Corps-Qods Force to reward any individual or group involved in targeting American forces in the region. These rewards would be financed in part by the revenue generated from state-sponsored exports to Iraq. Including electricity and natural gas, Iranian exports to Iraq totaled about $12 billion in 2020. Thus, the 1 percent share that the bill specifies for the Qods Force would be around $80 million, assuming at least two-thirds of exports to Iraq are government-to-government. This structure is a more official form of what the Qods Force has done in recent years to fund its operations and proxies in Iraq, either by siphoning from assets held up in Iraq or pursuing cross-border trade.

The bill would also give the Qods Force 30 percent of customs fees collected from the import of any U.S.-made or -branded products at Iranian ports of entry (Article 1.5). (It should be noted that importing American products and services is prohibited unless exempted by the Supreme National Security Council, per Article 1.8). In the first half of 2020, U.S. exports to Iran dropped to about $20 million, but this amount is expected to rise significantly if sanctions are lifted. Under the existing sanctions regime, exporting goods and services from the United States to Iran is prohibited, with exceptions for medicine, medical devices, and agricultural commodities.

The bill foresees a monetary union between “axis of resistance” countries within two years to facilitate the flow of money and goods between those members (Article 1.10), which currently include the Gaza Strip, Iraq, Lebanon, Syria, and Houthi-controlled areas of Yemen. This provision can be viewed as a counter to previous bills that sought to implement international standards recommended by the Financial Action Task Force, only to meet vehement resistance from Khamenei and hardline parliamentarians. In another move to encourage trade relations with friendly countries and bust sanctions, the bill directs the Foreign Ministry to prioritize trade with China, Iraq, Russia, Syria, and Venezuela (Article 1.11), as opposed to Western countries.

The bill also prohibits any “effective cooperation” between Iranian citizens and the U.S. government and other organizations, except for authorized cultural and educational activities that advance the regime’s interests. Under the “Countering the Reckless Terrorist Activities of the United States of America in the Region” act of August 13, 2017, individuals accused of such actions will be put to trial under espionage charges. When unable to arrest the accused inside Iran, the government shall designate them as terrorists (Article 1.6). This provision could facilitate the targeting of Iranian dissidents in other countries as well as dual-national Iranian American employees who work for the U.S. government or NGOs.

Regarding potential negotiations with Washington, the bill would prohibit and even criminalize any talks related to the regime’s military power (including missiles), its regional role, or its relations with the so-called axis of resistance. In fact, the bill prohibits the government from making concessions on any issue other than the nuclear program (Article 2). To further limit the government’s power, the bill forbids any negotiations with or in the presence of Americans unless the U.S. administration (1) officially apologizes for leaving the Joint Comprehensive Plan of Action (JCPOA) in 2018 and killing Soleimani, and (2) agrees to compensate Iran for damages incurred as a result of that withdrawal (Article 3). And if Iran does return to its original commitments under the JCPOA, it must do so in steps, each of which must be ratified separately by the Majlis (Article 3).

Support for Palestinians and the “Resistance Front”

Article 5 of the bill officially tasks the Iranian government with destroying the “aggressor Zionist regime” by the year 2041. This bold charge includes breaching the blockade of Gaza by sending essential goods to the territory’s residents via sea lines, starting no later than six months from the date the bill comes into force. In addition, the government would be required to actively promote the right of “return for Palestinian refugees,” the right of “return to Qods” (i.e., Jerusalem), the “liberation of Golan,” and the “annual pilgrimage to Qods."

Similarly, Article 6 instructs the government to provide humanitarian aid to the “revolutionary people” of Yemen, and to help break the blockade of Houthi-controlled areas by directly sending “essential goods, medicine, and fuel.” These shipments are to be sent at least every three months starting no later than March 2021. The bill characterizes any attempt to block such shipments from reaching their destination as an “act of war against the Islamic Republic."

The bill also introduces the right to permanent residence for immigrant and refugee applicants, giving them rights equal to those of citizens (Article 13). Citizenship applications from immigrants and refugees who serve in the Iranian armed forces and have “directly participated in military operations” would be fast-tracked. These provisions are mainly aimed at encouraging Afghan, Pakistani, and other nationals recruited by the Qods Force to serve in its proxy units. Finally, the bill directs the Basij militia to facilitate communication with “any popular front across the world that confronts the United States” (Article 14).