DUBAI—Two oil tankers were damaged in attacks off the coast of Iran early Thursday, including one operated by a Japanese company, on a day when Tehran rebuffed attempts by Japan’s Prime Minister Shinzo Abe to ease a military standoff with the U.S.


DUBAI—Two oil tankers were damaged in attacks off the coast of Iran early Thursday, including one operated by a Japanese company, on a day when Tehran rebuffed attempts by Japan’s Prime Minister Shinzo Abe to ease a military standoff with the U.S.

The incidents sent oil prices sharply higher, reigniting fears of trade disruptions in the Strait of Hormuz, through which over a third of the world’s seaborne crude oil is shipped. Brent crude, the international benchmark for crude prices, rose 4% on Thursday to $62.37.

The attacks appeared to use relatively sophisticated weapons, according to early assessments, and came within roughly 45 minutes of each other in the Gulf of Oman, where four tankers were attacked last month in an incident the U.S. blamed on Iran, which Tehran denied. The U.S. military has built up its military presence in the Persian Gulf in response to what American officials said were threats from Iran, sending an aircraft carrier, the USS Abraham Lincoln, and its strike group to the region.

Damage to one of the tankers was extensive, including a fire and a hole at the water line that was consistent with a hit by a torpedo or other projectile, according to early assessments. The other ship, a Japanese tanker, was hit with a projectile in a series of assaults, Japanese officials said Thursday. 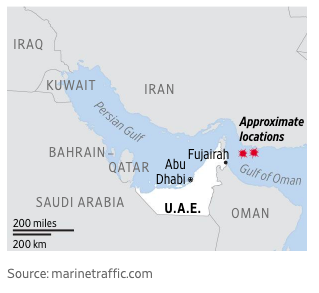 Both ships caught on fire, and their crews abandoned ship. Neither appeared to be in danger of sinking, authorities said. Both were carrying crude oil products headed for Asia. One tanker is operated by a Japanese company, according to Japanese officials.

Thursday’s attacks marked another in a series of skirmishes across the Persian Gulf that have escalated a crisis triggered by President Trump’s decision last year to pull out of a 2015 international deal to cap Iran’s nuclear program.

A missile fired by Iran-allied Houthi militias in Yemen injured 26 civilians at a southern Saudi airport on Wednesday, drawing Saudi accusations that the rebels directly targeted civilians. Last month, the Houthis took credit for damaging attacks on Saudi oil infrastructure. No one claimed responsibility for the attacks on four tankers in the Gulf of Oman last month, though the United Arab Emirates told the U.N. that the aggressor was most likely another country.

Iran has denied responsibility for any of the attacks. It accuses the U.S. of carrying out an “economic war” with a round of financial sanctions that have choked off most of its crude-oil exports and sent the country into a painful recession.

Until now, the Trump administration had been working to dim the prospect of military conflict with Iran, despite the military build up. Mr. Trump has told advisers he doesn’t want war with Tehran and has urged Supreme Leader Ayatollah Ali Khamenei and President Hassan Rouhani to engage in talks.