The ayatollah's message to the world 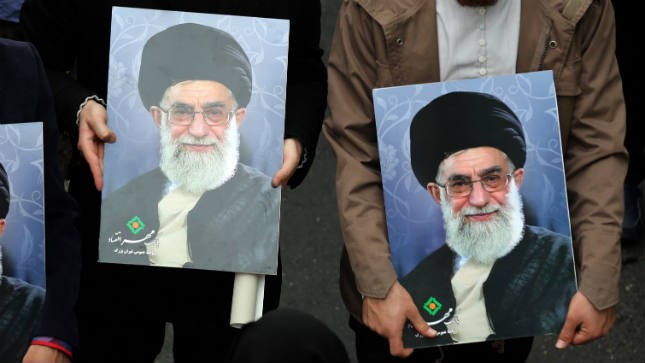 The supreme leader of Iran has published a book entitled Palestine.

As you would expect, it is a call to the Muslim world to destroy Israel and establish control over its territory for Islam, especially Iran. Ali Khamenei proclaims a Muslim version of the Brezhnev Doctrine which, you will recall, promised that once any land fell to communist control, it would be irreversible. The Khamenei version is slightly different. As Amir Taheri writes in the New York Post, "a land that falls under Muslim rule, even briefly, can never again be ceded to non-Muslims."

Do not think that this is simply part of the radical Shiite refrain that sees the current moment as the beginning of the final days that will bring the entire world under the control of the 12th imam. That vision is a general one, resting on the conviction that we are at the beginning of a messianic age. This book, while containing many references to the Koran and other parts of the Muslim canon, is much more specific and much less apocalyptic. He lays out a specific program for the end of Israel as a Jewish state, and also provides a basis for the Iranian domination of the region. Throughout, he inveighs against the Jews, wherever they are.

We should learn from the Quran in which Allah addresses Israel (the Jews) saying:

"O children of Israel! Indeed, you would do mischief in land twice and you will become tyrants and extremely arrogant." [Surah Al-Isra' 17:4-8]

Allah's soldiers will come to punish you for the corruption you did on Earth.

Moreover, the book relentlessly ties Israel and the Jews to America:

Today we face two factors to deal with. One problem is the Imperialism of the United States and its agent and proxy in the region, the Occupier Government of Israel — on which we should put pressure, and seek its destruction. This government is the expression and visualization [the agent and proxy] of the American hegemony.

Khamenei's scheme to take over Israel is based on a perversion of the democratic process. Khamenei proposes a vast referendum that would permit any "Palestinian" anywhere in the world to vote on the future of the country, but would limit Jewish voters to a fraction of the current population. It's not difficult to foresee the outcome of such a circus.

The destruction of Israel and the United States go hand-in-hand. They are part of the same process and the same mission which is to be led by Iran:

Our position against Israel is, as always: Israel is a malignant cancer gland that needs to be uprooted. In contrast to what shallow people believe, it is not impossible to defeat Israel and the United States. Superpowers have come and gone throughout history. Materialistic powers are neither everlasting nor infinite. Yesterday, there was a power called the Soviet Union. It was one of the superpowers, but it no longer exists. A similar historical contemporary change is still before us.

This book directly contradicts all those who believe that some sort of detente between the United States and Iran can be successfully achieved, so long as Congress approves the "understanding" reached in Vienna. It identifies the distruction of the United States as a religious mission, and calls on all Muslims, Shiite or Sunni, all over the world, to participate in this great religious obligation.

Read the full story from The Hill.