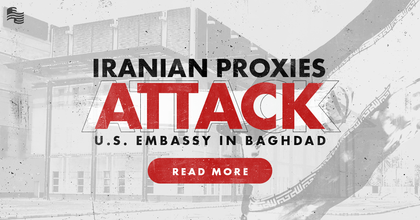 President Trump accused Iran of orchestrating the attack at the U.S. Embassy compound in Iraq on Tuesday and vowed to hold the regime "fully responsible."

Dozens of Iraqi Shiite militia supporters had gained entry to the compound in Baghdad after reportedly smashing down a gate and storming inside. It came amid protests over U.S. airstrikes, though Trump stressed that the strikes were in response to the killing of an American contractor.

"Iran killed an American contractor, wounding many. We strongly responded, and always will," Trump tweeted Tuesday morning. "Now Iran is orchestrating an attack on the U.S. Embassy in Iraq. They will be held fully responsible. In addition, we expect Iraq to use its forces to protect the Embassy, and so notified!"

The breach at the compound followed an earlier attempt by hundreds of Iraqis. The unrest came as Iraqis held funerals for the 25 fighters from Iran-backed Shiite militia Kataeb Hezbollah who were killed in U.S. airstrikes earlier this week, the Associated Press reported. The U.S. military said the airstrikes were in retaliation for last week's killing of an American contractor in a rocket attack on an Iraqi military base that it had blamed on the militia.

Reporters for the AP described a chaotic scene on the ground Tuesday and said the crowd shouted, “Down, down USA!” An AP reporter at the scene saw flames rising from inside the compound and at least three U.S. soldiers on the roof of the embassy.