U.S. to Designate Iran-Backed Houthis in Yemen as Terrorist Group 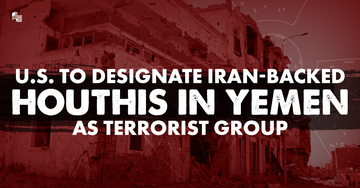 The U.S. plans to designate the Iran-backed Houthis in Yemen as a foreign terrorist group, a move some Western officials and aid agencies said would impede stalled peace talks and hurt the economy of an impoverished nation at risk of famine.

Secretary of State Mike Pompeo said he intended to designate the Houthis and three of its leaders for the group’s “terrorist acts, including cross-border attacks threatening civilian populations, infrastructure, and commercial shipping.”

The designation, which will be implemented on Jan. 19, will “advance efforts to achieve a peaceful, sovereign, and united Yemen” free of Iranian influence, Mr. Pompeo said Sunday.

The Houthis said the U.S. designation would have military and economic consequences. “There will be an escalation from our side,” said Mohammed al-Bukhaiti, a member of the group’s political council. “This of course will derail the peace process brokered by the U.N.”

Stephane Dujarric, spokesman for the United Nations’ secretary-general, said Monday, “We are studying the announcement closely to assess its potential impact.”

“But the decision is likely to have serious humanitarian and political repercussions,” he said.

The Houthis have been at war since 2015 with a Saudi Arabia-led coalition that backs Yemen’s internationally recognized government. The coalition’s campaign has killed thousands of civilians, destroyed infrastructure and exacerbated what the United Nations calls the world’s worst humanitarian crisis.

The Houthis have responded to coalition strikes by firing missiles at Saudi territory, including its oil facilities, and conducting sabotage against oil tankers—attacks that U.S. officials say are done at the behest of Tehran and involve Iranian weapons.