US slaps sanctions on Iran’s biggest airline and shipping group 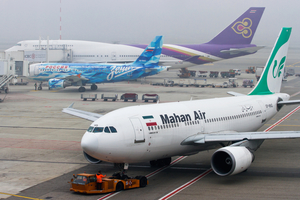 The U.S. will impose a fresh round of sanctions on Iran’s largest shipping company and biggest airline, the nation’s top diplomat announced Wednesday.

“As long as its malign behaviors continue, so will our campaign of maximum pressure,” Pompeo said Wednesday, adding that the transportation firms helped to “augment the regime’s campaign of terror and intimidation at home and throughout the world.”

The sanctions on IRISL and E-Sail will take effect in 180 days in order to give customers who ship humanitarian goods time to adjust their contracts. The sanctions on Mahan Air, however, will take immediate effect. Earlier this year, Germany and France announced a ban on Mahan Air, in part, alleging the firm transports Iranian weapons and personnel to Syria.