When Iran co-opted the United States 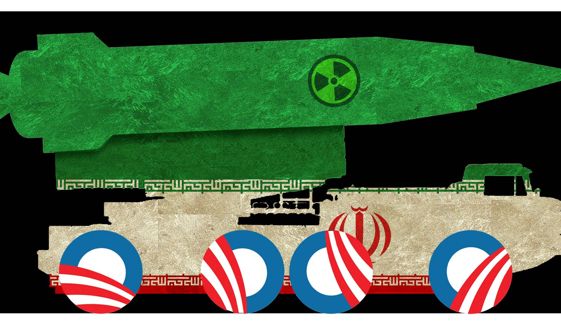 Proponents of the P5+1 deal with Iran will rue the day they chose party loyalty over their Constitutional obligation to ensure a sustainable framework against preventable danger. By abiding a craven administration’s naked political threats, Democratic members of Congress opted to protect their own political survival and career advancement, at the expense of historic and monumental geopolitical concerns.

The Joint Comprehensive Plan of Action (JCPOA) is, essentially, the bastard child of President Obama’s internationalist agenda, wedded to the principle of ideology over reality. When he assumed office, Mr. Obama promised a bright new world, ushered in by a lighter approach to foreign affairs: engagement. Only a darker world of terror and oppression turned out to greet him. The JCPOA is the administration’s cognitive dissonance squared.

Call it a sense of history with a twist. Almost immediately, Mr. Obama apologized for America’s follies to the global Muslim apparatus — tyrants and despots notwithstanding. He ducked for cover when the Green Movement stood bravely for representative government — later mercilessly crushed by the Islamic Revolutionary Guard Corps. He promised to display greater flexibility to Russia — which in turn conquered Crimea, and now has its sights set on even more. And he went through the motions with the Assad regime — which crossed his red line in Syria with impunity. And now, according to recent media reports, Russian President Vladimir Putin and Syrian President Bashar Assad have made common cause in their contempt for the United States by a buildup of Russian forces in Syria to bolster the Assad regime.

Eventually, Iran got the joke: No American demand would be backed by military force, or even seriousness. With steadfastness, the Iranians caused the Obama administration to backpedal all the way to Lausanne.

Not once during the negotiations did Iran find it necessary to tamp down its revolutionary fervor, despite Mr. Obama’s relentless efforts — or, rather, desire — to ease Iran into the international system.

It was never a mystery that Iran seeks dominion over the Persian Gulf. The regime repeatedly proclaimed that it perceives a nuclear weapons program as a precursor to that goal. But recalling the fate of the U.S. war in Iraq somehow made the gaps seems narrower, the would-be dissenters more manageable.

Because the JCPOA has been stirred by partisan claims, rather than subjected to the illuminating light of full disclosure and fair debate, it is fraught with a series of strategic and moral failures. The deal has the capacity to harm American interests profoundly. No deal meant doing the hard work to keep a lid on the Persian volcano. A bad deal blows the lid off the top in a treacherous region. Unlike the catastrophe in Syria and Iraq, this time America will not be able to look away.

Unfortunately, the nuclear deal consigns America to the same fate it was intended to avoid: war. With the passage of time and the shifting of leverage to Iran, the West will become increasingly invested in the nuclear deal and unwilling to intervene regionally against Iran’s adventurism. It will then only be a matter of time until the US is forced to fight another war or withdraw from the region, in which case war will inevitably seek it out.

To paraphrase Enoch Powell, the answer to the simple and irrational question is perhaps best answered by the simple and rational: the American people. Approximately two-thirds of the American public opposes the nuclear deal with Iran. Unlike this Administration, they fear a new dawn in which American influence in the Middle East is shattered and replaced by an unrepentant — and nuclear-armed — Iran.

Read the full story from the Washington Times.