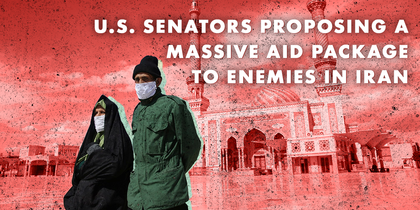 Imagine if FDR had offered a multi-million-dollar aid package to Germany before the Nazi surrender on May 7, 1945. Or if Truman had air-dropped food, medicine, and cash on Japanese cities before Emperor Hirohito announced his country’s surrender on August 15, 1945. Such scenarios would have been impossible then, but today, pundits and politicians are advocating sending aid to Iran, a sworn enemy of the U.S., to combat the coronavirus. They are also urging the release of aid for the Palestinians, whose leaders range from hostile (Fatah) to terrorist (Hamas).

Eight U.S. senators are proposing a massive aid package for Palestinians in the Hamas-controlled Gaza Strip and the Fatah-controlled (and PLO-dominated) Palestinian Authority (the so-called West Bank), and many pundits are urging the Trump administration to end sanctions against Iran. Both of these proposals would, in effect, aid and empower our enemies, and therefore undermine rather than serve U.S. interests at a critical moment.

In light of the COVID-19 pandemic, Senators Elizabeth Warren, Chris Van Hollen, Patrick Leahy, Bernie Sanders, Tom Udall, Jeff Merkley, Tom Carper, and Sherrod Brown are demanding that the U.S. provide $75 million in humanitarian aid to the Palestinian people in the West Bank and Gaza. In a March 26 letter to Secretary of State Mike Pompeo, the senators, all Democrats, gave him until April 3 to specify how the State Department will ensure that the money “mandated by the FY 2020 Appropriations Act” will be used to “provide the Palestinian people with access to adequate medicine, medical equipment, personnel, and other resources to combat the threat of a major coronavirus health crisis” in the West Bank and Gaza.

But providing aid to the Palestinians means handing $75 million to the PA and Hamas. What do the senators think Palestinian leaders will do with that money? Judging from a long historical record, they are likely to use it to continue their fight against Israel — launching rockets and digging tunnels to smuggle weaponry and murderers into Israel, paying stipends to the families of terrorists caught or killed in the act — and to line their own pockets.

Israel has already provided aid to the Palestinians to combat the coronavirus. It delivered 20 tons of disinfectant to the West Bank, as well as test kits and training for Palestinian health-care workers. It sent 200 test kits to Gaza and offered more direct aid to Hamas on the condition that Hamas return the remains of two Israeli soldiers killed in the 2014 Gaza war. Instead, Hamas launched rockets into Israel. Israel’s good-will efforts have not been reciprocated. There is little reason to think that U.S. humanitarian aid would be used for the stated purpose.

While Israeli missile companies like Inovytec convert their production lines to make ventilators, Hamas’s money is used to make more missiles. As Michael Milstein, head of the Palestinian Studies Forum at the Moshe Dayan Center in Tel Aviv, put it, “Hamas is doing almost nothing for the people of Gaza... All the money needed today to confront the coronavirus is going towards rockets.”